Diana Ross Lights up the Stage with Phenomenal Performance 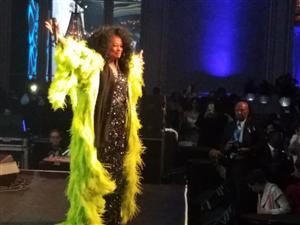 Diana Ross Lights up the Stage with Phenomenal Performance

CHICAGO, Nov. 21, 2016 – On Saturday night, nearly 1,700 supporters of the Chicago Urban League gathered at the Chicago Urban League’s Golden Fellowship Dinner – Centennial Edition to commemorate the organization’s 100 years of service to the community. Hosted by comedian Damon Williams, the sold-out event raised a record-setting $2.65M and culminated with a phenomenal performance by the legendary Diana Ross.

Chicago Urban League President and CEO Shari Runner challenged the crowd of business leaders, human rights advocates, philanthropists and elected officials to have serious conversations about racism in order to change its false narrative about African Americans and create a more equitable Chicago.

“The League has never shied away from leading difficult conversations or defending the rights our ancestors fought and died for, and we never will, no matter how insurmountable the odds may seem,” said Runner. “We’ve arrived at the apex, facing our racial moment of truth – are we going to continue providing an alibi to the historical and current role of racism, or are we going to finally tear it up from its roots?”

The night was filled with other unforgettable moments including the presentation of the Bill C. Berry Award to longtime Chicago businessman and civil rights activist Spencer Leak, Sr. of Leak and Sons Funeral Homes. Past League Presidents James Compton, Cheryle Jackson and newly appointed Deputy Mayor Andrea Zopp were recognized for their roles in moving the League’s mission forward.

“As I look around at this gathering of friends, Board members, colleagues, partners and passionate advocates for a stronger African American community and a better Chicago, there can be no clearer certainty that change comes because people make it happen,” said Runner.

About the Chicago Urban League

Established in 1916, the Chicago Urban League works for economic, educational and social progress for African Americans and promotes strong sustainable communities through advocacy, collaboration and innovation. For more information, visit www.thechicagourbanleague.org. Find us on Facebook or follow us on Twitter.